Alas, this post I found in a dusty back corner of my blog’s draft storage room, piled beneath several other incomplete ideas. I thought of it because a lovely fellow blogger requested recipes with fresh ginger, but upon digging into storage to get her a link to this recipe, I discovered I had completed all but the last sentence or two. Ugh.

Nevertheless, I tell myself, as this was a savory treat made early this summer, it’s likely to be a more appealing experience now that the season is tempering and giving way to cooler, breezy nights (at least in New York, anyway). 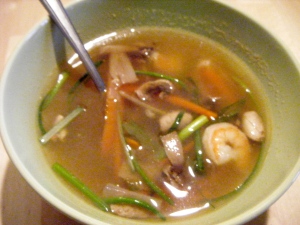 Note: I’ve left the rest of the post intact to maintain its original integrity… and because I’m lazy.

Despite the steamy weather, I’ve been on a soup kick. My subscription to Everyday Food Magazine was one of the best $10 investments I’ve made in a while. Each issue is chock full of useful tips and practical recipes… and because the issues are pint-sized, you can easily tote one in your purse or back pocket on a grocery run, keep it handy without taking up valuable counter space as you cook and stash it with your cookbooks for future referencing.

The basis of this light and gingery Asian-influenced soup, the flavors or which remind me of the classic variety often served at hibachi grills, was inspired by a recipe from a past issue. The simple scallion-ginger broth is quick and lends itself to a variety of add-ins, allowing you to change it up according to your mood and available ingredients. For the broth you’ll need:

In a medium saucepan, heat the oil on medium-high heat. Combine scallions, ginger and garlic, stirring until scallions soften, about three minutes. (Because I used jarred minced garlic, which tends to burn quickly, I waited a couple minutes before adding it.) Add the chicken broth and fish sauce and bring to a boil. Once the broth is boiling, reduce heat and simmer to blend flavors for about five minutes.

Now for the fun part – add whatever stir-ins you’d like. This time around, I used:

Served with Asian salad greens from Pei Wei that were generously donated by one Trina Archer, this warming broth had me imagining I was seated at an Asian restaurant, where the ghostly soothing sounds of ancient chimes and gongs should be floating through the air.

Now that’s it’s been a while since I actually made this soup, I’m very in the mood to give it another go… time to add ginger to the grocer list!

Gave it a whirl? Let me know what you added and how it turned out!

fresh off the press…